Causation or the Art of Influencing Life


CAUSATION
or
THE ART OF INFLUENCING LIFE

No system, no government, no magic wand or potion will ever set us free or give us what we want, if we do not unlock the knowledge within ourselves that will release our inherent power. The greatest misconception of people on this planet is the idea that their fate is determined by powers acting independently of them.

I look for a word that can define a very basic concept. The ability of man to be cause over situations and circumstances, over his body and emotions, his impulses and weaknesses, his life and the world, the space and time. I guess this statement alone strikes as odd. Because we hardly ever use the word cause in such context.

In our civilization, the word cause is mostly associated with negative effects and seems to be used with negative connotation: The cause of war, the cause of suffering, the cause of evil. But how would we call a person that interferes with circumstances and acts as a guiding agent? How would we call a person that refuses to submit to his fate and tries to control it instead? Is there such a word? Because the concept definitely exists.
I search in the dictionary. Causative: effective or operating as a cause or agent. Close, but not quite the word I'm looking for. There's no word with this definition:

"marked by the intention and ability to act as a cause".

What happened to the concept that describes our most fundamental ability? How come it has never been expressed by a single word, thus lying forgotten through the ages beyond the created world, hidden behind gods and fate?

Man as a cause

When we were young, our mother probably never told us to be cause over school or relationships, over our body or life. Maybe she was even trying to be cause over us herself, especially in regards to our body - insisting that we should eat against our will or go to bed when we didn't feel like it. How many of us could walk barefoot without threats of catching a cold? Or eat ice cream in the winter? We were thus taught that someone else was cause over us or responsible for us.

Our schooling and life in general added to this frame of mind, leaving us full of uncertainty about our ability to create what we want, vulnerable to the unknown, subject to human or natural laws we cannot control.

We cannot be cause over something if we don't feel responsible about it to some degree. Responsibility is the recognition that something is our duty or depends on us. And this recognition leads to specific actions or behavior. When we disclaim any connectedness with something, it becomes impossible to exert any influence on it. When we just try to repel it or pretend it doesn't exist, we automatically become the effect of it. If we blame something, we will become the effect of it for a very simple reason: If something else is responsible for a situation, then that is the cause, and we, inevitably, the effect.

This has started to become vaguely perceived by a number of people in this new era of spiritual awakening, but they err in saying "the responsibility is all mine." Our decision to become cause does not require to falsely assume responsibility for all the errors ever made. Lacking any practical way to change conditions, this is just another kind of fatalism.

The film Kymatica promotes the idea that each one of us is responsible for all the plagues of our planet: famine, poverty, illness, globalization:

"...when you think the end is near, the Apocalypse, Armageddon,

and when you think we as a species are doomed...

It is not THEY, it is YOU that brought this about."

Full of high-sounding statements, I only wish that the film suggested a practical way to change all that for which each one of us is supposed to be personally responsible. It is not a matter of finding fault but rather finding a way to become cause.

The truth is somewhere in between. There's always something, small or big, we can have an effect on. Without necessarily "taking the blame".

Interfering with the "normal course" of events

Some will argue that it is not right to influence situations - we should just accept things the way they are, as they are guided by a "higher power". The beautiful moments "just happen". The setbacks "happen". And all we need to do is to simply learn to live our life as it comes.

But even those who say so do not really believe it. Even if they think that nothing depends on them, waiting for another power to bring about the change they want. They expect God or other people to produce the effect they seek.

Nobody wants to live life the way it is. Every person seeks to influence his or her environment and strives to be cause, at least to some extent. If people cannot control their boss, they control their spouse or their children. If they cannot control the government, they control their employees. Some try to be cause through shouting or the use of violence. Many accomplish it through lies or fraud. When all else fails, some will make an ultimate attempt to cause an effect by ending their lives. In the upper levels we will find the activists and active citizens, who seek to change the world through action. Artists try to accomplish it through their art. Philosophers through thinking.

At lower levels of causation, people deal with things within their reach. With those things they can influence and control with little or great effort, without having to use mind power. At any level, however, our success to influence or bring about an effect depends on the amount of our intention. By intention I mean the positive mental attitude of visualizing what we want and believing without any reservation that is will happen. We could also call it faith.

The less controllable is the effect we want to accomplish, the more faith we need. Faith means certainty that something will take place. That is the meaning of "Ask and you shall receive". The basis of the law of attraction.

Belief is power. This was known and used by the various religious leaders. They said: "If you believe in God, your prayers shall be answered". And he who truly believes without a shade of doubt that God will give him what he want will receive it! But it was not God who made the wish come true. It was his own power, a power that anyone can use effectively regardless of what ggd he believes in, if he believes in any god at all. Because faith is simply the ability of a being to create the world.

There is no greater obstacle to our ability to cause things than ourselves. The faith factor, which I would rather call intention to avoid religious connotations, is not a simple matter. We want something to happen. We think about it positively and with intention, but all of a sudden we find ourselves overwhelmed by counter thoughts and reasons why it might not happen. Perhaps we are not even certain if we want it or not. Maybe we wonder if it is the best, after all. Perhaps we fear the responsibility attached to our desired goal. Our mind is reactively flooded with all the restrictive ideas we have been "educated" on. And so our intention is losing its power.

Limiting thoughts are commonly accepted beliefs by a very large number of people, and they derive great power from this broad agreement. They are not easy to overcome. Gradually, however, we could eliminate all these ideas that are not really ours, all these "truths" that are not true. And reaching our true self, having removed all the add-ons, our intention will suddenly gain great power and effectiveness. Because there will be nothing there to hold it back.

If you think you cannot make a difference because you're one in a billion, because you're too small against the vastness of the universe, consider this: Figures have meaning and significance only in the material world. Fortunately, they mean nothing on a spiritual level.
Posted by Ariel at 3:28 π.μ. Δεν υπάρχουν σχόλια: 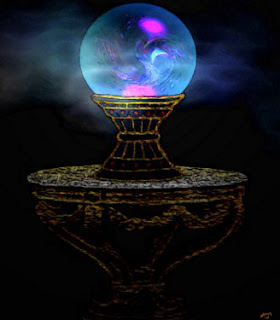 Are we Created or are we Real?

ARE WE CREATED OR ARE WE REAL?

Commonly held beliefs are the greatest obstacle to knowing. One of them is that we come to a created world. Religions say we are ourselves creations. Animated beings designed by the Great Animator. And our lives go by as planned, the scenes succeeding one another according to the play.

How could we create?

Only the Animator could do this. The animations do not have self-existence. But we do.